High anxiety: Hard to play the game when you’re feeling the pressure 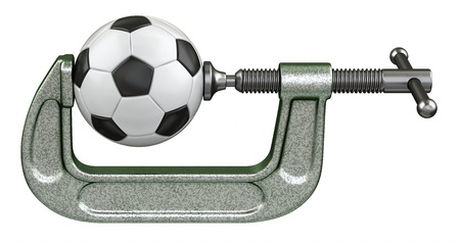 This past weekend I watched my son and his teammates play in the championship match of a U-12 tournament in Kansas City. The players were confident and relaxed when they started the game, scoring two goals early and looking as if they might cruise to the title victory.

With the comfortable lead midway through the first half, the team started to substitute the starters. The momentum then began to shift as the new players struggled to control possession. This placed stress on the defense, which up to this point had controlled the midfield and tempo of the game. The players became rattled, and their stress rose. They missed tackles, and the communication among the players started to falter. By halftime, the score was 2-2 and momentum was lost.

This is always a critical point for a team that has held a solid lead only to see it slip away. Coaches, players and parents were upset at the half, and it undoubtedly added more stress to the mix. The starters were back in the lineup to begin the second half, but an air of anxiety and tension hung over them. They weren’t checking to the ball as well. They weren’t communicating as well. There were far too many mistakes to count.

The anxiety among the team was steadily increasing, and it clearly was affecting the players’ performance. The coach was frustrated. The parents were frustrated. I was frustrated. More importantly, so were the players. In the end, though, the players persevered. Despite all of tension, they managed to score another goal to win the game and the title.

Looking back, this was a character-building experience, but that lesson was lost because of the negative environment. The players left the field that day feeling as if they didn’t deserve the title because they weren’t able to put together a strong performance for the entire match. They were stressed out.

Let’s take a moment to reflect on the stress and anxiety the players experienced that day in Kansas City. They were clearly in control of the game early in the first half. Then the momentum shifted quickly, and the anxiety rose sharply. The coaches and parents expressed their frustration, and the anxiety increased. The starters were sent back onto the pitch, only to deal with more anxiety of trying to regain control of the game. Imagine yourself trying to perform under those conditions.

Now let’s bring neuroscience into the equation. Recent studies focused on how individuals respond under different levels of anxiety. The findings should not surprise you. Those who experienced high levels of anxiety made significantly more mistakes in the decision-making process. Overall, the neuroscience researchers believe the findings indicate that high-anxiety levels may interfere with our ability to make good decisions.

How do those findings relate to the title match previously described? Coaches and parents were guilty of ratcheting up the stress when the team was struggling. This didn’t help the players. In fact, it created a greater amount of anxiety and a greater number of mistakes as the study indicated.

If that is the case, how then should coaches and parents react to this type of situation? Here are three steps everyone can take to keep stress in place.

In short, coaches and parents should become more cognizant of the stress levels for players and avoid adding to an already high level of anxiety.

On a personal level, I am proud of the way my son handled the stress in that championship match. Did he play his best soccer in the second half when the pressure was high? No, not even close, but he did work through it. I only wish he could have walked away from that game recognizing that there was significant character building being taught.