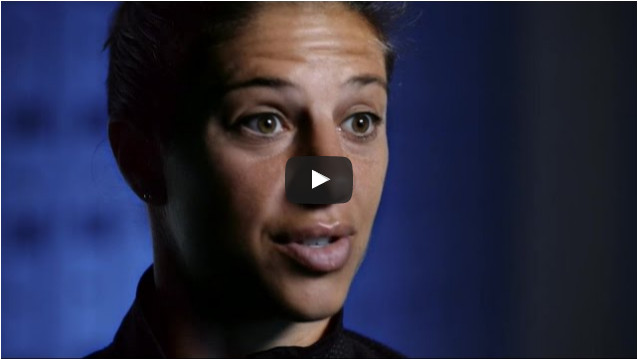 I can still remember my son’s words from a year ago when I had just begun creating my visualization product. He said he didn’t understand why I would bother investing my money in such a product, and that he could not imagine how it would work. He stated that under no circumstance would he use my product, and that he thought it was silly.

Anyone with children understand quite well that more often than not children perceive parents as imbeciles, far too old to have any knowledge or wisdom about anything relevant to their world. Since that time I have slowly given him tidbits of fact regarding professional athletes’ use of visualization and the science behind my product.

My son has softened his stance enough to at least listen a little bit about my product. As he absorbed a bit more, I explained that pro athletes use visualization because everyone is quite good at that level so they are seeking to gain an edge. We talked a bit about competitive traveling soccer and playing the sport at the high school and collegiate levels. We could both agree that there are many levels where the competition is such that a performance edge helps both a team and player. I further slid in some facts about the science surrounding visualization.

Then low and behold, this past week my son asked me to give him my mobile app to use for his upcoming games. The fact that he was willing to try my product was huge and a bit scary for me because I know that ideally a person needs to practice and train with visualization for a little bit before expecting results. Everyone seems to want almost immediate and noticeable results without the effort, and my son is included.

It was three hours prior to his first competitive match of the day, and I looked over to see my son listening to something through his headphones. I asked him after the fact, and he indicated that he listened to a couple of different modules on the trip to the games. Needless to say, I was excited. I was also nervous because of a couple of reasons. First, I am beta testing my product, which means that I am still working out the kinks. Secondly, this is my doubting son, who has decided to use the product but not as prescribed, which is three to five times a week for approximately 15-minute sessions. I said nothing except that I thought it was great that he was willing to give it a try and that I looked forward to his feedback.

We arrived at the soccer field complex, and other than a bit of rain, all else was proceeding as normal preparation for the upcoming match. Once it started, I immediately notice something a bit different about my son. He seemed to have laser focus and was anticipating the ball better than usual. My son can, at times, be a bit of a ball watcher and loses focus within the game. However, this was not the case during this match.

In fact, I had never seen the level of intensity and leadership from my son, who is a starting center back for his competitive team. It was like watching a different player. I asked my wife if she noted anything about his play. She agreed and said that he was playing extremely well. After the match, I asked my son what he thought about his play. He recounted several things from the visualization and said those things stuck with him. He was confident the visualization helped him. We had about three hours before his next match so he decided to use the visualization again, meaning that he was pretty sure he was on to something here.

As the owner and creator of this product, I must admit that my day was made regardless of the outcome of the matches. I was beside myself with excitement that my son had been willing to give the visualization app a try and had found almost immediate results. I personally cannot imagine that results will come that quickly for everyone. My son has always had an active imagination, which I am certain helped him visualize quickly and easily. It usually would take a bit more training to strengthen those neuron pathways.

In any case, I am delighted that my 16-year-old son is now a believer in the power of visualization, but he is far from being alone. Professional athletes have known and incorporated the power of visualization in their training. Soccer star Carli Lloyd, months prior to her phenomenal performance in the World Cup, used visualization to prepare herself for competition. She scored six goals in the tournament, including three in the final. Wayne Rooney, prior to every match, visualizes how he wants to perform on the pitch. Christano Ronaldo uses visualization both prior and during matches to strengthen his performance. Michael Bradley, one of the hardest-working midfielders in soccer, uses visualization to increase his focus and performance.

Visualization is nothing new for high-level athletes, and if used as a supportive training tool along with physical practice, it will help increase performance, focus and confidence for young athletes who seek to master the sport they love.